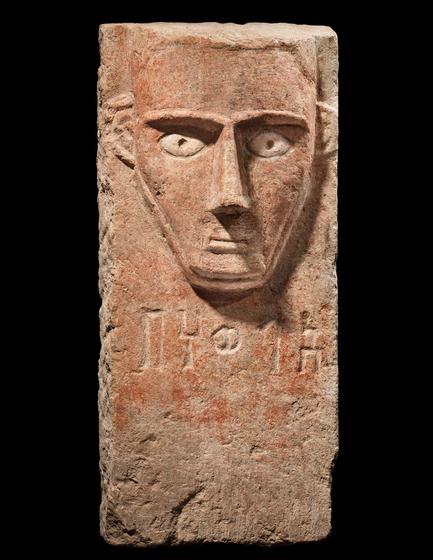 Inquire about this piece

South Arabian sculpture is characterized by its striking variety of carved memorial stelae and votive statues, often carved in alabaster or in limestone, such as the present piece. They are noted for their distinctive, contemporary aesthetic, and their often enigmatic and powerful presence. The principal kingdoms of Ma’in, Qataban and Saba, home of the fabled Queen of Sheba, were among the most prosperous in the ancient world, and they flourished from the eighth century BC to the fifth century AD. Ancient Greek and Roman authors marveled at the immense wealth of South Arabia (known in the Roman world as Arabia Felix – ‘fortunate Arabia’), its huge temples and precious statuary, made possible through the region’s prominence as a trader in expensive spices and perfumes.

The present stele was carved in limestone, a naturally occurring stone, and is particularly striking because of the amount of original red pigment that has been preserved on the surface. It depicts the stylized face of a man, the person for whom it was made. The deep-set eyes, which imbue the image with such an evocative and intriguing presence, are inlaid with shell, and the pupils would once also have been inlaid coloured stone or bitumen. The individual is identified by an inscription in Old Sabaean, which reads ’lwhb (‘Ilwahab), a male personal name.

Stelae such as this would have been placed at or inside the temple or sanctuary in honour of the named individual, a perpetual reminder of his piety. A limestone stele with the same name inscribed on it was found in the al-Jawf region of Saudi Arabia and is now in the National Museum of San‘a’. The face demonstrates a similar elongated shape, although it has been rudimentarily inscribed rather than modeled in relief.