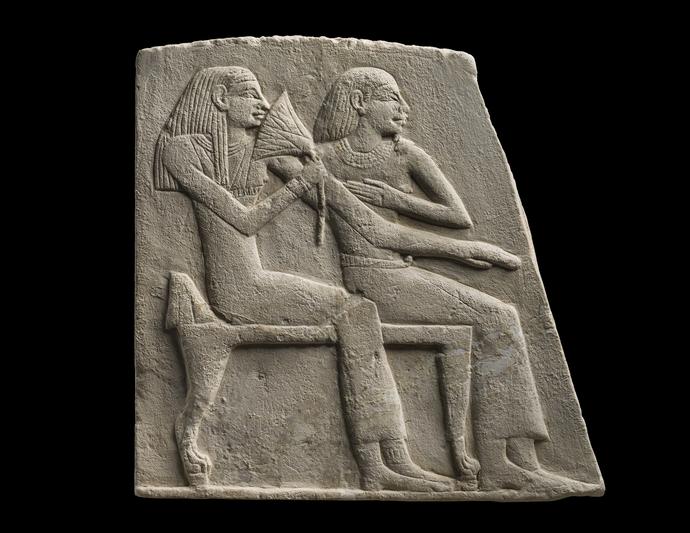 Inquire about this piece

The Middle Kingdom represented a period of great change in Egypt. The reunification of the kingdom during the eleventh dynasty heralded new ideas surrounding kingship, society, religious practices, and relationships with neighbouring peoples. There was a great flowering in art and architecture, with many modern scholars declaring this period a ‘Golden Age’ in Egyptian history. Surviving works from this epoch are rare, but some of the best examples betray great skill and sensitivity, and are often characterized by an aura of serenity and grace. What is most poignantly conveyed through these works is the Egyptian deep-seated esteem for the delights of human existence, the divinity of the king, and an unerring belief in the afterlife.

The present relief perfectly captures this air of dignified composure. Sensitively carved in that most quintessential fabric – native Egyptian limestone – it depicts a male and female, most likely husband and wife, seated on a lion-legged chair. The female extends her arm affectionately towards her husband, or perhaps towards another individual, now lost, and the male appears to wrap his right arm around her. The picture is very much one of a loving and equal partnership, as they pledge their joint dedication and devotion to a particular god or king. The wife holds in her hand a lotus flower, a traditional symbol of rebirth and regeneration. Whilst many reliefs were originally conceived for funerary contexts, their subjects and potent symbolism commonly transmit an emphasis on the eternalization of life, a celebration of everyday tasks and achievements. The complete stele form which this scene originates probably sought to ensure kind admittance to the afterlife and continued prosperity for its patrons.

The stylized carving and highly formalized character of Egyptian sculpture is known to have inspired the great artists of the modern age, not least, Sir Jacob Epstein, a former owner of this very relief. It was in around 1910, as he began to align his works in direct carving with cubist and futurist theories, that he became fascinated by African art, amassing one of the largest and most highly regarded collections of African art in Great Britain. In turn, he built up a similarly notable collection of Egyptian, Assyrian, and Pre-Columbian works, all chosen for their unique aesthetic qualities. From this esteemed assemblage, the relief passed into the collection of Carlo Monzino, one of Italy’s leading collectors of Post-War Art. Beginning with paintings in 1956, in 1958 he expanded his collecting interests to include African, Oceanic, Pre-Columbian, Egyptian and Cycladic art, culminating in the purchase in 1963 of Jacob Epstein’s iconic collection.

A testament to the artistic ingenuity of the ancient Egyptians, this compelling relief exhibits a visual vocabulary that not only endured throughout Egyptian history but greatly affected the artistic endeavours of the great sculptors of the modern age.